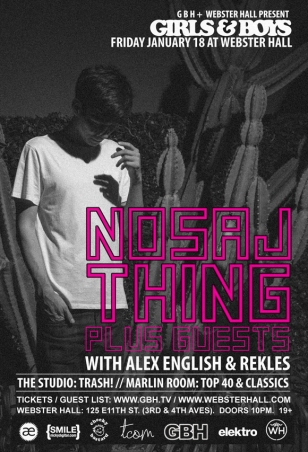 Pushing past the dance party going on in the basement & the other dance party on the first floor, I finally arrived at my chosen dance party upstairs. Webster Hall is known for creating 3-4 different worlds per night, and Fridays, the place to be if you’re into underground dance music is Girls & Boys. Unlike the other parties, that spin hip hop, top 40, latin, 80s & 90s and the occasional dash of punk rock & alternative, GBH & Alex English bust their asses every Friday night to get quality EDM DJs from all over the world to blow out the main ballroom. Whether it’s Feed Me, Zedd, Joker, Madeon, Bloody Beetroots or  Nero, the consistent stream of sick nasty talent is enough to make even the most jaded, cynical & ancient dance-party aficionado get off his ass and fight the crowd for a chance to hear some of the best sounds on one of the best sound systems in Gotham.

The crowd was getting into Starkey’s set when I arrived. Starkey, one of the guests on Nosaj Thing’s tour, was one of the best examples of a modern big room opener I’ve seen in a bit. Intensely attuned to where he thought the crowd was going, the cuts, samples, and deep bassy rhythms came fast and furious. The crowd was developing gradually, but the cluster near the stage remained densely packed as always. The NYU kids, ravers, junglists, guidos, euros, emos and the ever present dubsteppers bundled together like bad mortgages and grooved to the break-y, dubb-y fun that Starkey was dropping. There was a liberal amount of grinding going on, which is par for the course south of Union Square & East of Broadway on Thurs/Fri/Sat nights, which always amuses me.

Starkey’s mixing ebbed from music you want to grind to to music you NEED to dance to. Starkey was feeling the crowd, and molding his sound as they required, sometimes even before they knew what they wanted. It was quite impressive to see the opener so attuned to the somewhat schizophrenic needs of the population, but he did so masterfully and the younglings were having a banging time through to 1 AM when Nosaj Thing took control of the decks, the lights dimmed even more, and the stars behind the stage came out.

Nosaj Thing’s set was confusingly & inspiringly good. I’m not really sure how to describe what happened over the next two hours in any other way. Nosaj Thing is a technical genius from the West Coast, where the bass is already significantly different sounding than what you’re going to hear at a typical EDM show in the Tri-State area these days. If you don’t believe me, just watch this music video of the first single off his new album, entitled “Eclipse/Blue,” and tell me in the comments the last time you heard something like that outside of your house.

When the track hit early on in his set, the attitude in the room totally changed. The sense that the way you’d grind to dirty UK dubstep really had no place here at the moment pervaded the space. There were still couples dancing together to the music, but it was slower, more graceful, almost a bit more civilized. There was this interesting change that had taken over the crowd, simply because I’d imagine the vast majority of them (myself included) had never heard West Coast Bass on speakers that weren’t theirs. The more passive beats packed in with the salvos of echo’y samples & arrays of rhythms and chords he strung together live (definitely not a DJ set) were compelling in a way I’d not heard Girls & Boys in a long time. I managed to catch Alex English at the bar and while he was waiting for his drink, I made sure to thank him for making it happen. And to apologize for the fact that Gotham probably wouldn’t fully appreciate this music for a year or two. He laughed heartily, thanked me and handed me a drink ticket. Which, was definitely a first @ Webster Hall for me. I picked up my Jack & Coke and headed back to the dance floor just in time to be able to dance to this other amazing track off of Nosaj Thing’s new album:

The track, with its deep grooves, west coast synthy vibe riding on top & irregular snare kicks, gave the room this ethereal atmosphere that probably had some of the more intoxicated of the denizens of Webster Hall convinced they were floating. The occasional raver or light show-enthusiast dotted the edges of the dance floor, but the crowd was densely packed in at the front trying to get as close to one of the new Cali virtuosos of bass as possible. The switching of beats, rhythms and even music style over the course of the set was absolutely magical, and the younger in the crowd really had never conceptualized that shit could sound like this, much less that they would like it. As I sipped my drink and watched Nosaj Thing bring his set to a close, the resounding calls for multiple encores made me feel good about tomorrow. It seems that people definitely know quality when they hear it, as the drunks that stumbled in from the other floors couldn’t quite pull themselves away, even with the lure of hippity hop & reggaeton downstairs tugging at their hips.

This is Terry Gotham, see you on the dance floor.