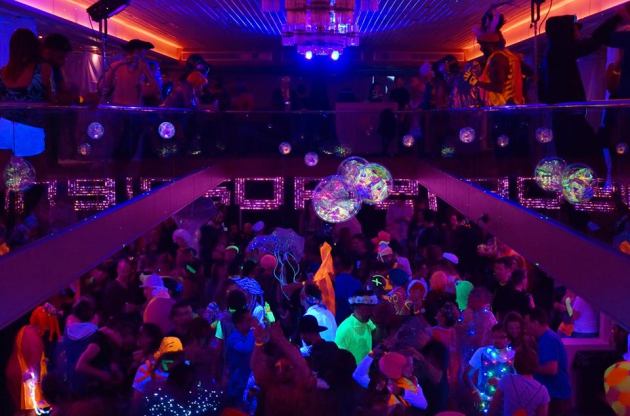 I didn’t quite know what had happened. The last time I was standing on this boat I was reviewing a Dirty Dutch party by DJ Chuckie. The boat had been completely re-lit, redecorated & outfitted, such that there was an additional dance floor. Who knew you could just add a dance floor to a party…that’s on a boat? DiSORIENT does. While the icy weather kept the boat docked (literally, late February, when the Coast Guard told all sea-faring vessels to get off the water because of whatever iteration of Blusterfuck 2015 we were on at that point), the party went on. Those ravers, burners & party people who braved the arctic blast were treated to a dope party on 3 floors, with better lighting than I can find in most clubs that have concrete foundations & power-grids not floating on the Hudson. While getting my first drink and making the rounds, whiteowljaguar ensured things were heating up nicely on the top floor. This area was straight fire all night, but I was so happy to see Vigil & Dollpartz making it happen for the DiSORIENT crowd. This was a long time coming, and I couldn’t be happier for them, with a fantastic set happening that night. Here’s my favorite mix of theirs, again I believe. You know I’m waiting for fresh hotness from WOJ.The full dance floor was previously ringed with VIP areas for bottle service, but DiSORIENT had it decked out in glowing, blinky shiny pornj (as the image above shows), top to bottom. The denizens of the boat clustered on the dance floor, relaxed overlooking the stage as Kofi switched off to Oshana. This kind of expertise you see in Oshana isn’t always around, but the dance floor recognized & moved into it seamlessly, almost expecting this kind of understated yet seemingly effortless execution. I do believe at least one of the cuts in the playlist above made it into the set, but this wasn’t even the only thing happening. Matt^2 was taking care of the rear room, one that I’d previously seen flooded with dude bros and being DJ’d by a Jersey Shore reject with abs that you could cut cheddar on. Thankfully, the party there this time was significantly better with those two stoking the fire quite handily, with bigger bass & slightly more in your face beats than what was going on elsewhere. Mysti was taking care of the top room after WOJ handed off the headphones. It was after something like the 4th time I wandered from room to room, unable to decide which had the best music, that I realized something absolutely wonderful. There were female DJs in the main & 2nd rooms, during prime dancing hours for this event. There would be a lady DJ on for the rest of the night in the main room, and the 2nd room had opened with a mixed duo. I couldn’t believe it. With no fanfare, zero announcements on the flyer, probably without realizing themselves, DiSORIENT had a more Lady DJ friendly party than any event I’ve been to in the last several years, anywhere in the Tri-State area. This was kind of stunning when you think of how DiS not only did it, but then said nothing about it. I can tell you, if some skeeze club in Queens had an all Lady DJ night, there would be liberal use of pink, naked ladies and hangover-inducing shots. This was just strong women steering the ship for several hours. To note, I’ve not seen it at any other Burning Man camp event, Lower East Side bar or Brooklyn warehouse party outside of the LBGTQ community. So I wanted to take a minute to give a thumbs up to everyone involved in making that happen, whether it was conscious or not. When Ultra Music Festival books 5% female acts (5. That’s not a typo. Five) and DiSORIENT tops 40% (math is fun kids), we should pay attention.  The smoking deck was filled with shivering people making conversation while dressed in pornj cocktail dresses and/or leopard print thermal vests. The night felt crisp and good against the backdrop of a heated dance floor that had been stoked & raging all night. Whether it was Friar Tuck in the back room, Eskuche & Nu Sky making it happen or Lauren Ritter continuing the cavalcade of “something other than white dudes,” a good time was had by all. The Pornj Guard got to people who needed assistance, and the flow was professionally handled/directed, such that I never really felt crowded or empty anywhere on the boat all night. Not the easiest task, but you don’t get to throw a party in Dubai without knowing what you’re doing. Next stop, figuring out how to get on the press list for THAT party.

But seriously, this was a tremendous undertaking, in stupid conditions, executed flawlessly. Kudos to Lady Sanfiorenzo and Viktor for producing & The Remarkable Ms. Nuvoletta for their fine work, Kofi & TJ who put together a stupendous lineup and to Golden Child for coordinating Pornj Guard. Good times were had by all, even the ones who went HAM. This is Terry Gotham, see you on the dance floor.