You wonder what it’s like until you’re there. The booth. Where the magic happens. The scene could not exist without it, and your career as a DJ is made within it. Whether it’s a folding table set up on the side of a room or a walled off alcove with a mini fridge and a serving area, this was the place to be. And, this wasn’t the booth at any old place, this was the booth at Cielo.

Cielo is an institution, one of those clubs that stands on its own in NYC and has for about a decade now. To exist for that long in Gotham is to be here for an eternity. The space attracts the privileged, the beautiful and people that want to dance in a room with one of the best sound systems on the East Coast. Cielo’s system is second to none and DJs know it. They come from all over the world to spin here, and tonight I was honored to see an old friend take control of the decks.

The crowd appreciated it too. Forward Disco has a great track record of putting together quality talent in unusual places. They’ve collaborated with the legendary SOUP parties, NOSI Music, and picked up some great spots like Output and Bar 13.  Tonight however, Cielo was chosen to feature one of the masters of groovy, funky disco house. The crowd was prepared and his set was off.

Nutritious is a consummate professional, 180 degrees away from the pre-created, press-play-and-smile DJ chompback we’ve seen proliferate at events. When the guy turns knobs, things actually happen. And the work was exceptional. The sound built out slowly, but with a respect for the listener and the space. Which was packed to capacity. People had come to see DJ Nutritious, and to hear him on the Funktion One soundsystem I talked about earlier.

As the master got to work, his casual attitude dropped away, being replaced by an intense focus on the decks, mixer and the crowd. The music turned up the crowd grooved on it and his hands began to move faster & faster. 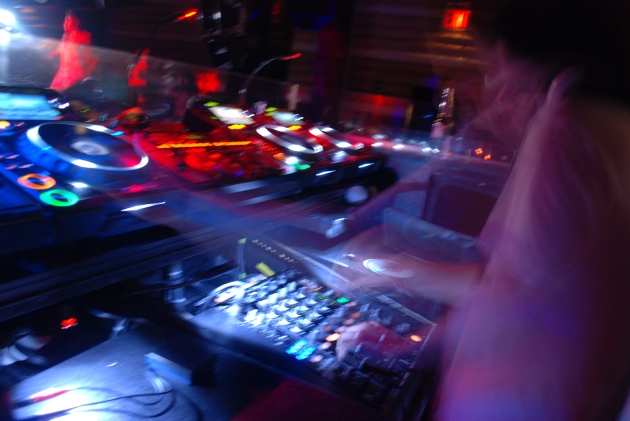 And faster still. The set was funky but deep, hard but chill. The vibe of the club slowed down but kept grooving hard. You can always feel it when a DJ has control of the space, this peculiar but awesome feeling where everyone in the room is pulsing along at the same tempo, reacting to the same time to every drop, hook, sample and twist that Nutritious hit us with. And across the dance floor, Zoe Wilder, his better half, danced. Boy did she dance.

This is Terry Gotham, thanks for taking a stroll with me through a day in the life. See you on the dance floor soon.