We arrived at Webster Hall hours earlier than I’d ever been there on a Friday night. Elohim & EDEN had the 8-10pm time slot on the main floor, so I thought I’d be settling into an intimate show for the select few people in NYC that had heard of my underground favorites. I couldn’t have been more wrong, Gotham was out in force. The dance floor was full at 8pm. All you party producers struggling to get butts on the floor at 10:30pm, know that they pulled almost full capacity at 8:02. If you were in the crowd, you know how palpable the excitement was.

Elohim was on stage, striking the perfect balance between mysterious, alluring, distant, and smoldering. She was also doing everything her fucking self while she struck said balance. I’m not sure how to describe this, but when you see exceptional indietronica being performed, you expect there is more than one person making the stuff live. Elohim thinks that’s adorable. She did vocals, synth, chord, percussion, lighting and visual media…herself. And it was good. Not like “oh wow, jack of all trades” good. Good like “Why isn’t she working in a giant record studio out in LA?” Her effortless moody, synth future pop chill rolled around the main room at Webster Hall, bringing teen conversations to a halt and forcing all eyes (and ears) on her. The cover work, the transitions, the curated visual art that accompanied her songs, all orchestrated hauntingly well. In all honesty, I’ve never been transfixed or enraptured by a live performer before. DJs don’t do it that way for me, and I never got to see Michael Jackson perform live. I’ve been going to live music for 18 years, and she’s the first.

She took total command of the room, with her honest, subversively empowering message melting through the crowd. For a moment while she played with her vocal modulators, I seriously thought EDEN was a girl and I was just deeply unfamiliar with his (her?) work. If there was any doubt Elohim deserves her own tour, it was blown away by this expertly executed set, involving Porter Robinson level emotional authenticity. My companion for the evening immediately purchased her work on vinyl, and you could see dozens of others having the “I need this in my life” moment. All the inventiveness of Imogen Heap, with full control of her sonic atmosphere. I cannot wait to see what she does next. She left us wanting more, but EDEN didn’t disappoint.

EDEN has crept slowly into my universe over the last year, as I dug for exceptional indietronica to bring to y’all. His soaring, triumphant melancholy has found a home in my core music awareness, blending guitar, live synth work, forward-looking percussion and some of the most mind-bendingly gorgeous vocals I’ve heard in a long time. He earned a spot on my 2015 Gems playlist for good reason. This show was a perfect example of what a single person can do on stage in the realm of “live performance.” Switching from guitar to production to piano to percussion while pouring his soul into the microphone. 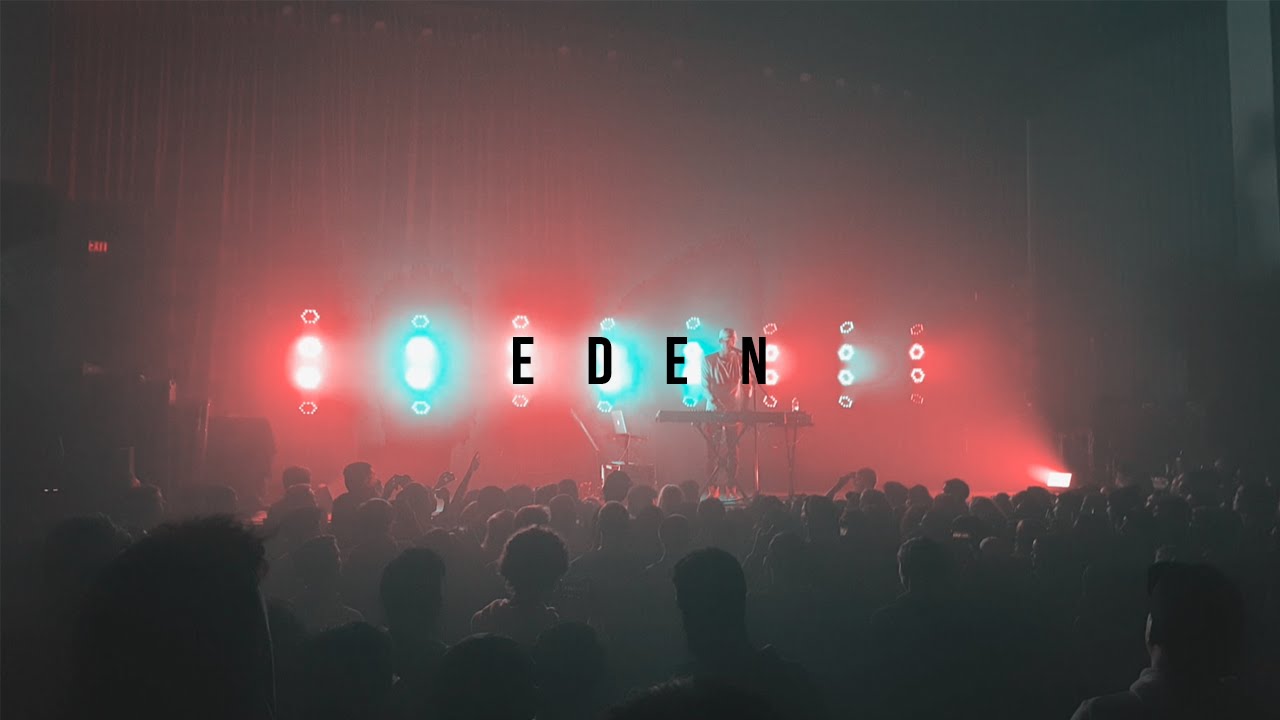 The crowd was 100% there for EDEN. No one was there because their friend brought them, or because they wanted to get into Webster Hall early. The crowd knew a few of Elohim’s songs, but ALL of the crowd knew ALL of EDEN’s songs. Even the parents of the kids that weren’t let out of the house alone, knew the words. And sang! He was able to stop singing and let the crowd take a chorus during the very first song he played. This very much felt like a return home for EDEN, with the crowd cheering him on every step of the way.

His lighting scheme was understated, yet effective. The combination between misty, chromatic floods and his song progression worked perfectly to allow him to explore the space, drop in crowd favorites, and keep the audience from getting tired. One particularly fun moment involved EDEN asking the crowd to flood the stage with their flashlight apps while a special rendition occurred. A secret cover that blew our faces off that I can’t wait for him to release as a track. I won’t say who he’s covering, but once it’s out, I’ll be reporting on it here.

All in all, the night gave me tremendous hope for the future of music. I’d been growing tired of DJs being record players and parties with themes that you would find at any 50’s prom. EDEN & Elohim reminded me what a single person could do. How they could connect with their audience, how they could produce a small band’s worth of sounds by themselves, how they could make the children cry and cheer. They are great artists, and I was glad to have seen them perform. I hope you take the time and spend the money to do so as well. Not because I was paid to write this, or because I got free tickets. But because they just might give you hope too. This is Terry Gotham, see you on the dance floor.