(I have been waiting to do this interview for years now. Mohawk is a luminary in the NYC underground scene, my boss at New York DanceSafe , a spectacular dancer & a generally all around stupendous person. She’s throwing a party that you need to go to, and I’ll be giving two tickets away, so you have no excuse. But before you do, kick back and enjoy this long-form conversation with someone who is fielding a tactical force to keep your sorry butt alive if you’re partying in the Tri-State area.)

1. How is the party coming along? Any new surprises to announce, or should we just show up and find out? The party is pretty much ready to go and we’re in our last week of ramped up promotion. I wouldn’t say there are true “surprises”, however I’m sure many people are hearing about the party through different sources, so beyond the musical talent we’ll have on board, the additional performers, vendors, and workshops might come as a surprise to many. We’ve been making announcements a few times a week, highlighting some of what’s to come. We don’t expect everyone to keep up with these announcements, but we definitely want to showcase all that we have in store. It’s getting pretty late in the game and we still have people wanting to take part in the festivities. Don’t bank on this type of event happening again–we host events with specific objectives and move forward from there. It’s a “launch party” of sorts, so come find out for yourself and see what it’s all about!

2. You’ve been doing harm reduction for a long time, have you seen any changes in the work/scene that you’d see as positive? Any worrying trends you are trying to sound the alarm about? I’d like to preface this answer first: I really only have visibility of what’s happening in NYC. In doing this work with a nationally represented organization, a lot of people assume that we all see the same things or face the same problems. This is not necessarily the case, so I’ve chosen to take the New York chapter in different directions based on what we learn each year. The good news is, people overall are becoming more “hip” to testing. People want kits! The worrying thing about this is that, people forget that drug use comes with risks beyond just the potential of ingesting the “wrong” drugs by accident. An obvious worrisome trend is how much do we need to fear fentanyl popping up in drugs, especially non-opioids? This is one with a lot of hysteria around it right now. It takes a lot of work to keep the most accurate information in circulation and weed out the sensationalism and myths.

3. There’s a big difference between being a volunteer activists & being a manager/chapter leader. What’s the hardest thing about organizing harm reduction volunteers and managing an org that no one told you about? No one told me anything, but I expected a lot of hardship, which is why I held off for over a year on reforming a chapter in New York City. I generally lack patience for unreliable people, but I think the biggest struggle has been managing and maintaining relationships across different chapters. We’re all volunteers–including the chapter heads. There will be a lot of egos and some trouble-makers. It’s rare that we have to deal with anything too intense, but when it happens, you’re usually left to your own devices to do what’s best in order to continue our mission in reducing harm. Making sure we can fulfill that is top priority.

On top of that, New York City is a very unique territory to provide service to. It’s a city of 8.5 million–THE most populous city in the US. There’s a lot of work to be done that can be done in NYC alone. This is our priority–not New England, New Jersey, Upstate, Central, or Western New York. Every year in NYC, the social and nightlife scenes change–venues close, new ones open, management switches hands, attitudes change, laws change, bridge and toll fares increase–it’s a lot to keep up with as a volunteer leading a public health organization in a city with a high cost of living. However with this, it keeps things fresh, it keeps me on my toes, and gives this chapter an opportunity to be pioneers in keeping this organization forward-thinking and progressive.
4. We’ve known for a long time that harm reduction fails sexual and ethnic minorities in this country. For those who might not know what that could be, could you give our readers a tangible example of what that failure looks/feels like? I am an ethnic and sexual minority. If I step out of the rave/EDM or Burning Man scene for 2 seconds, people don’t know what harm reduction is, let alone DanceSafe. When you’re at a Burning Man affiliated event, rave, or EDM festival that has harm reduction onsite (or none at all), can you count in your head the number of black and brown people in the same space? What about LGBTQ? Think to yourself, have you ever been to a circuit party and heard or seen a single person talking about or practicing harm reduction? I know I’ve been offered cocaine as a meal–and that’s not harm reduction. In many cases, I don’t think the problem is so much that people don’t recognize this is an issue, but few know the best ways to try to address it.

5. What dumb-ass behaviors pop up no matter the party, scene, music, age or mix of attendees? Are there any bad things that drug users do that you would say are universal? Mix alcohol with virtually any other drug. Not only does it not potentiate the good effects of any substance outside of maybe THC, it usually decreases many of the desirable effects of the other substances being taken. Drinking is habitual in social settings for many people, so few think about the side effects from this volatile combination. I refer people to the TripSit chart in case they don’t believe me. Some have argued that cocaine and alcohol are a “good” combination, but when I attack these viewpoints, it’s from a harm reduction standpoint. Alcohol and cocaine is a unique combination, as it actually results in the creation of another recreational drug of its own inside of the body called “cocaethylene”. I’m sure many people “enjoy” the mixing of substances as it prolongs the euphoria for marginally longer (like 1 hour in total), however, it exponentially increases risk, as it also carries an 18- to 25-fold increase over cocaine alone in risk of immediate death. With that level of danger involved, my personal recommendation would be to find a different (and cheaper) high. 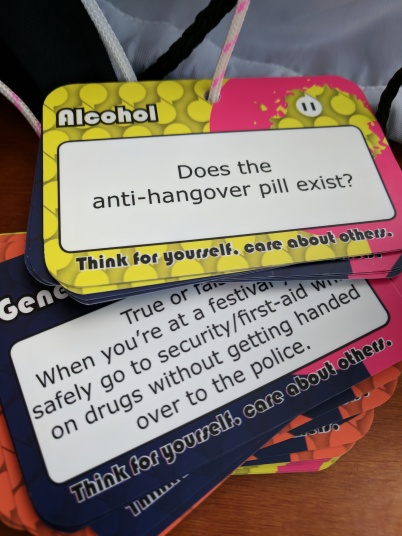 6. Best place to do harm reduction? Whether it’s a country, festival, party, or branded hang out, where would you always go do harm reduction if asked? Kind of a tough question, as I’ve done harm reduction in several countries and dozens of areas in the USA. I like the thrill of “mixing it up”, and learning from different perspectives and trying to take on new harm reduction challenges. Providing services to the same groups over and over gets stale, and starts to feel ineffective (although it’s an easy fundraising opportunity, no doubt). I would probably have to go with Europe or South Africa. If I had to choose a single country–the Netherlands. Aside from the struggle to find a hairdresser (for the record, Kinki Kappers is the go-to) the attitudes around drug use are far more tolerant, and it blows my mind that I can walk into a public facility to have my drugs checked–in private. North America feels lightyears away from being as tolerant and effective in harm reduction. Cocaine and MDMA deaths seem to mostly occur because the drugs are too strong, not because they are adulterated or misrepresented. Fentanyl is not a “problem”. People with opioid addictions can receive proper treatment and care instead of jail sentences and isolation. The Dutch teenagers are generally more informed than many American adults I’ve encountered, and when they aren’t informed, they’re extremely receptive of the information. I’ve had a conversation with an 11 year old boy and 14 year old girl who know more about drugs and harm reduction than the average person my age (31). I enjoy being intellectually stimulated, so doing harm reduction in a culture where drug use isn’t shamed so much is refreshing. Instead of debating with people over arbitrary distinctions between drugs or people that use drugs that are plant-based versus synthetic, or legal versus illegal, or talking about only misrepresentation, we get to talk more about physiology, behavioral patterns, etc. (I’ve attached two pictures of the card game they use as talking points. A person chooses a card blindly from this deck)

7. If I had a magic wand and you could do harm reduction at any party, festival, or event in the world, where would you go? I’d stay right here in NYC and do harm reduction at Electric Zoo because it needs it, but still need a lot of convincing to properly bring harm reduction onsite. I’d rather be impacting my local community.
8. Moreover, if you could make one change to drug or health laws, what would it be? Decriminalize all drugs, and strategically legalize others. But since we can only change 1 law, decriminalization on the federal level is where I would start. In many people’s minds decriminalization means complete anarchy and debauchery, but that’s not what that means. Many Americans can’t wrap their minds around these concepts that places like Portugal have already implemented. An analogy that Carl Hart used in his Ted Talk “Let’s quit abusing drug users”, is that… “decriminalization would be like treating drugs like a traffic violation. Someone might be required to pay a fine if they’re caught with possessing illegal drugs, but they will not be subjected to criminal prosecution”. In the case of Portugal and other similar countries, a jury determines if the use is recreational/infrequent or problematic, and if so, then they are sent to treatment.
9. While building out this amazing event, what have you been listening to these days? I’ve been pretty bored with my normal playlist of electronic music (varying from chill wave and other downtempo genres, dance music like house and techno, and extremes like Shranz and IDM) to listening to electro boogie, funk, and oldies. When you work this hard, sometimes you need a little (or a lot of) Gap Band, Zapp & Roger, Prince, and Earth Wind & Fire and to sing “Love Machine” with all your soul.
10. MLK Jr. said that the moral arc of the universe is long, but tends towards justice. We’ve been doing this for a long time. Do you think it’s getting better or worse out there? I think somehow it seems to be rubberbanding back and forth–but that just may be my limited American perspective. When I travel, I see lots of little good things in the world. It really depends on what timeline you’re living in and what point of view you’re seeing it from.

Don’t miss the party on the 19th, I’ll be there working, dancing and harm reducing with the rest of the NY DanceSafe crew. And, if you want a shot to win 2 free tickets to the event, make sure to follow @terrygotham on Twitter, because more info on that is coming up Wednesday morning!