Two years ago I was lucky enough to experience one of BangOn’s first events. This night to remember involved The Chainsmokers, KOAN Sound, Minnesota, carnival rides and a whole lot of good times. 2 years later, almost to the day, there I was in the Green Room, chatting with Prince Fox about future music & high fiving people who couldn’t wait to see the rising star. He had the prime set for the latest BangOn extravaganza, Soulstice. 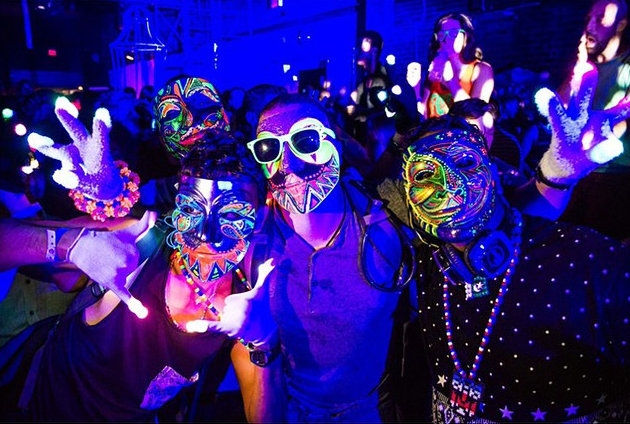 Set up at the end of Moffat street, one of the few pristine Brooklyn hoods not fucked by gentrification, the space was smartly arranged & expertly decorated. BangOn!has real production value, so anyone thinking this is the same kind of party as the outlaw/illegal raves that NYC saw in the late 90’s/early 2000’s is in for a serious surprise. The security was tight & the amenities were on point with portajohns away from the food (critical) and the silent disco near the chill space (also critical). The bar, away from the dancefloor & directly opposite the facepainting, and it faced a new feature I’ve never seen at parties: A hairdresser. There was a hair artist giving people blowouts and mohawks and all manner of dope hair. Frankly, this needs to become a standard at every party I go to. I’d love to have someone properly style my mop. Shit, this is a reason to get there early. But, the real reason we were all there was the music, and Prince Fox was there to greet them. In a word, wow. He wasted no time, playing through technical difficulties, dropping into a punchy, future set almost immediately. I’ve talked about this kid more than once, but seeing him live was an entirely new world. I was overjoyed that Prince Fox could keep the relatively ADD crowd focused. Brooklyn took his signature style of Future Pop and ran with it. I saw the crowd go from filtering in to full in 10min. Again, full main stage dance floor, before midnight. The remixes and originals came quickly, but one of the highlights was his mashup of Turn Down For What & Rick Roll. This actually got plenty of ravers concerned he was going to drop the stupendous bass of DJ Snake on them, but then, BANG, he never gave us up.

The set, pound for pound, was the best I’ve heard at BangOn! in some time, but the night was just getting started. My boy 2Melo put out a fantastic signature global bass set on the Silent Disco, and Breach made short work of the main stage. We were there for hours after Prince Fox’s set finished, as BangOn! does a great job as a selectro brand, and has for quite some time. Their A&R deserves congratulations, but at the end of the day, so does everyone else associated with the event. Start to finish a delightful reminder that quality still hides in Brooklyn. You just gotta go searching for it. This is Terry Gotham, see you on the dance floor.

I’d not been out to an I Feel Party in a couple of months, but there I was, in the middle of a packed dancefloor, significantly earlier in the evening than I thought I would be, dressed in some of my better Middle Eastern finery. Their rotating concept/theme wheel had landed on “Magic Carpet Ride” an amalagam of various Middle Eastern & Arabic motifs. Any concern I had that this was going to be the Arabic equivalent of blonde chicks at Coachella in War Bonnets, was swept away the moment I entered. The music pulled me towards the depths of the floor, in front of their increasingly impressive LED & lighting work. The raw Brooklyn space had been wrought into a moderately decorated floor & hallway, which led to an outdoor hookah lounge/chill space and a massive outdoor area for smoking and hanging around. END_OF_DOCUMENT_TOKEN_TO_BE_REPLACED