(I was lucky enough to chat with the mad scientist behind one of my favorite acts of all time, ph10. A force of nature in NYC back when the word rave meant something, ph10 has taken up residence in Denver, giving his fans an epic show this Saturday at The Oriental. Here’s to hoping everyone who reads this will help me convince him to keep the brutally majestic live d&b train going.)

1. How have you been preparing for the show? What can Denver attendees expect? Mostly focusing on promotion, it’s a tough town to get more than a couple hundred people at a show like this and we’re shooting for 400 at the Oriental. Beyond that, Pete and I have a brand new track to debut and I’m bringing some older tracks, some unreleased tracks including some hot fire from Clark of Saturn as a tribute. There’s a handful of people coming all the way from NYC and I’m trying to make it worth the trip.2. For everyone who missed your performance in 2013, Do you think you’d ever put out a set online? Brutal drive that was. I was stuck in Kansas for two days because a snow storm closed I70. You know what’s funny about Kansas? As bad as you assume it’ll be, it always finds a way to be worse. Sure I’ll put out a set online. You want to help set that up? Let’s do it live. (ed. You bet your ass I will)

3. Have you kept up with drum & bass these days, are you a still fan of what’s going on in the space? Honestly, I wish I could say no. I wish I could say “oh i’m way past that, I listen to Hungarian pan flute music exclusively now” but i still love DnB and it still gets me going when i need it to. My favorite artist right now is Amit – especially tracks like The Hunted / Killer Driller / Survivor / Daaku and Human Warfare. Brilliantly simple, minimal, dark and just so well produced – pretty much the opposite of pH10. 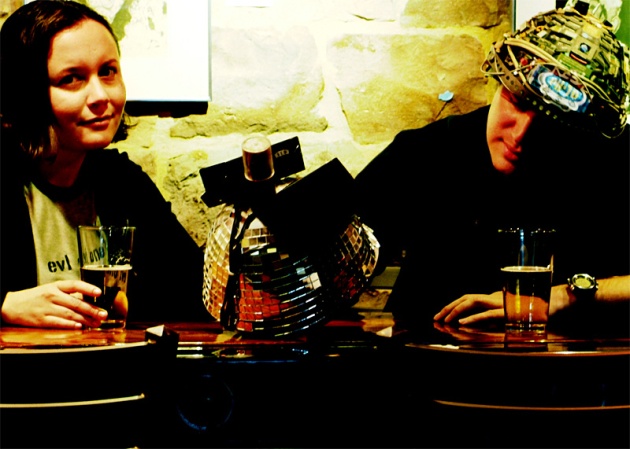 4. Right now, it’s all about the DJ and the fireworks. What is it all about for you when you’re up there? Really? Fireworks? That’s cool. I love pyrotechnics. I used to have a helmet with two flash-paper guns that i fired at the audience. People hated it. Venues really hated it. What’s it about when I’m up there? Sound. There’s nothing more important to me than filling the room with a full, rich auditory experience. Secondarily I mix everything live and like to tweak all the synths to give a semi-live experience to the fans that might know the records. Beyond that, I just bang my fat head up and down and try to have fun. 5. Do you partake in the Denver scene at all? Would you ever consider showing up and mixing records or messing around with some live production somewhere just for your local fans? Not as much any more but when anyone i know ask me to get involved in a show – even if that just means showing up with a computer and dropping samples into a metal set – I rarely decline.

6. Do you keep in touch with your fans? Are they clamoring for unreleased tracks? I’ve never had anyone clamor for anything from pH10 to be honest. If anyone wants unreleased tracks (and there are a few good ones) just ask.
(ed. – You bet your ass there are a couple I’ll be asking for :D)

7. As someone who was there before, any thoughts on what Brooklyn & the NYC party scene has become? I go back to NYC a lot and I stay in touch with the promoters that I used to work with – what I hear is that shit is pretty flat right now. I can’t confirm as I’m not in the scene every day but the guys that I looked up to doing parties every month just seem burned out on NYC and have moved on. Having said that, the last time pH10 played there was the aforementioned show at House of Yes in 2013 and it was an incredible experience – so emotional for me. Many of our NY fans came out to greet us, the venue was very well run and the sound was incredible. I do miss NYC.

8. With the explosion in commercial festivals, where do you think we go from here? What’s a club kid to do? Yeah those parties look terrible to my jaded eyes but if those kids are having fun, good on ’em. What I hope happens is that they are inspired by that scene and start to find indie spots to throw their own parties. All we had in the 90s and 00s in NYC was about 5 good crews, filling venues like Wonderland, Rubulad, Frying Pan, Lunatarium etc. That’s all it took – one of those crews throwing a genuinely good party every week and lighting up the city. I hope we get back there some day.
9. Knowing how it all turned out, do you have any nuggets of wisdom or insight for people just on the precipice of what you created? You know what, It’s finally been long enough to look back and be proud of what we accomplished rather than wonder would could have been. Regardless of the fact that some of the stuff with Pete Miser did pretty well on college radio and commercially with licensing and placements – we’ve sold a couple thousands records total, across our entire catalog over our entire history. Not exactly setting the world on fire. But the shows that we’ve performed – putting us in a position to look down off of a stage and see pleasure and pure joy in someone’s face because of the goofy shit that we’re playing – that’s what I’ll always treasure about this project. pH10 is silly but we fucking rock at the same time – that’s a great combination and all too rare these days. I like to think of pH10 as the electronic Murphy’s Law.  10. No chance we could convince you to keep it going huh? Even maybe just mastering some unreleased material or mixes of your favorite classic tracks? I didn’t expect anyone to bat an eye at the ‘last show’ declaration but it seems that there’s more interest than I expected – especially in doing live shows. The show hasn’t even happened yet so it’s a bit early to renege but fuck it. If someone in our family comes along and asks us to participate in something good, I might not know how to say no. As for releasing new stuff – that’s inevitable. I just need some help making it happen. Hit me up.

(Tickets, if you’re in the hood, can be gotten here, once again)