Pope wine! A great commentary on Pope Francis’ decision to chew coca leaves on his trip to latin America. Quick explanation on the history of Vin Mariani, the coke/red wine mixture touted as being consumed by 2 popes! 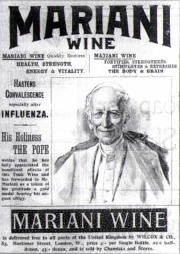 According to a report from BBC News the Pope ‘plans to chew coca leaves’ during his visit to Bolivia. Although portrayed as a radical encounter, this is really a return to cocaine use after a long period of abstinence in the papal office.

Although the leaves are a traditional, mild stimulant that have been used for thousands of years, they are controversial as they’re the raw material for synthesising powder cocaine.

The leaves themselves actually contain cocaine in its final form but only produce a mild stimulant effect because they have a low dose that is released relatively gently when chewed.

The lab process to produce the powder is largely concerned with concentrating and refining it which means it can be taken in a way to give the cocaine high.