While there’s a whole lot of information out there about how to not die when the party lasts 4-8hrs, what the heck do you do when you want to go HAM over a weekend? Multi-day events are becoming the norm, as festival culture to continues to explode. To put this in context, there were over 800 festivals in North America, in 2013 alone. This stuff is the new normal, and they’re quite different from club nights. 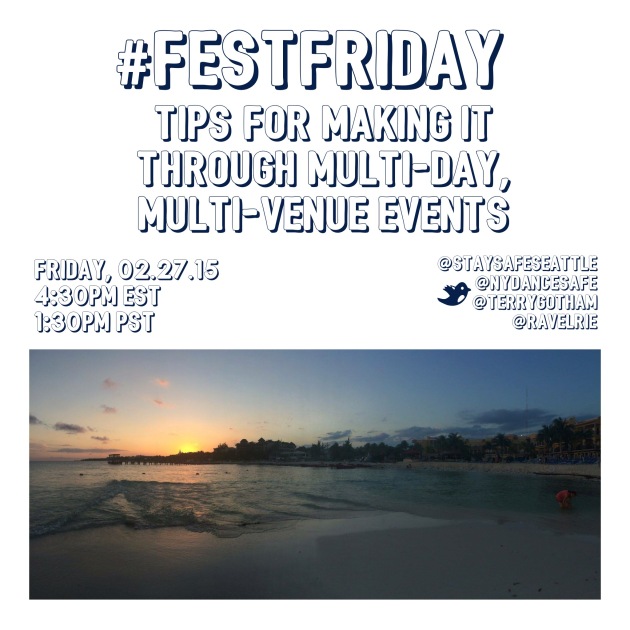 My peeps ravelrie, NY DanceSafe & Stay Safe Seattle are going to focus on tips for the raver/festival attendee themselves, but I wanted to take this time to directly address fest producers & managers. I worked with the Electronic Music Alliance to develop this Event Safety guide for festival managers. There are a number of tips that most people haven’t thought of, but if ravers are aware of them, they can help mitigate the potential for a bad experience even when the festival is kind of a clusterfuck.

Some of the easiest take aways are:

Halloween is upon us and with it, some of the largest parties of the season. To expand on what’s happening 4:30 PM (1:30 PM PST) during our #FestFriday discussion on Twitter, I wanted to explain one of the biggest problems in the dance community today, the RAVE Act. I’ve written about this extensively on a much larger blog, EDMTunes. The short story is, laws that were created to prosecute people who rented to crack dealers, were used to prosecute rave producers. Public comment on the laws and aggressive prosecution especially after tragic events essentially destroyed the EDM boom of the mid 2000’s. Any of us old enough to be keeping score can tell you about how certain clubs got obliterated, gangbusters style. NYC, DC, LA, you name it, nights were being ruined. This was done under the pretext of protecting children from unscrupulous dealers, and Joe Biden did his best to ensure that no one danced to hardstyle, happy hardcore or techno again.