(So happy to be posting this! Flexstyle has been one of my favorite artists innovating in the dance music space for years now, and I’m honored he agreed to talk about his work & ridiculous new album, which I’ll be yammering about shortly.) 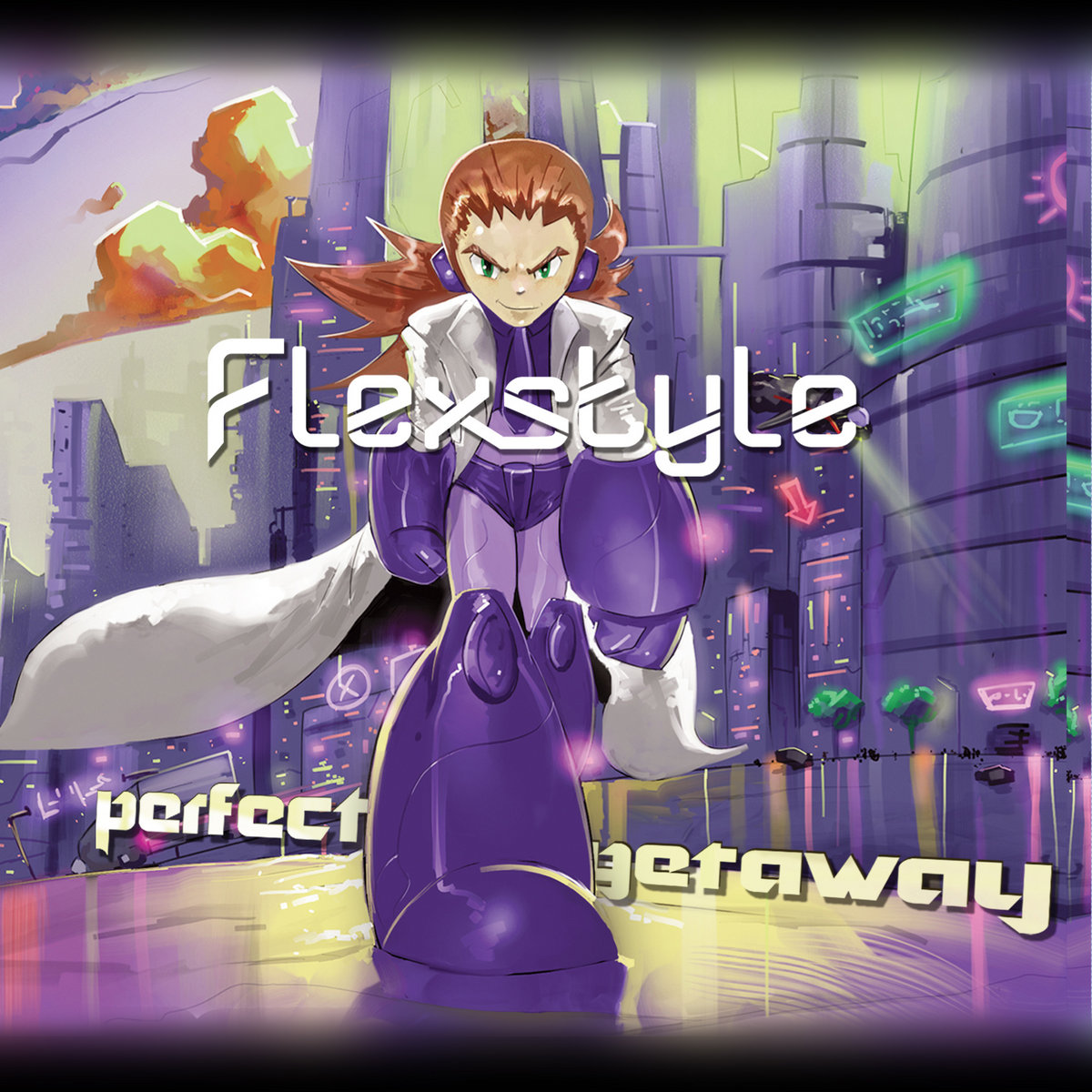 1. Tell us about your new album Perfect Getaway! What can your fans expect from the 15 track extravaganza? More than just 15 tracks, actually! There are 15 tracks officially on the digital album, but there are also a couple of bonus tracks included as well with some Oasis remix contest runners-up. Aside from that, this may be the most eclectic album I’ve ever released—certainly stays true to my name and mission of being flexible in the styles that I create! This album contains both original and remix work that I’ve completed over the last few years. It contains appearances by video game remix superstar and entertainer extraordinaire Ben Briggs, versatile EDM and VGM cohort Jamison Randall, my good friends Airdrift and dmGuillotine, and many more. In short, expect more of the same, but different! DnB, downtempo, trance, vocal synthpop, electro, progressive house, dubstep, trap, and breakbeats all make an appearance.

2. How did you join OCRemix and start doing VGM remixes? OverClocked ReMix is probably the main “home” I have as a musician, and I started participating over there in…I want to say about 2008? I got my first posted mix on the site in early 2010, I believe, after a couple of rejected mixes and a lot of participating in various competitions and events. That’s pretty much the best way to get posted over there, by the way, is to keep trying and keep participating in the community. I’ve always loved video game music, so it was only natural that I found the site and started participating. I think it was after seeing a writeup in a magazine that I actually first heard about it—might have been Computer Music or something like that. So, to properly answer your question, I don’t really remember exactly how it was I joined up, but it was definitely meant to be!

3. When it comes to production, can you speak a little bit about your process? Any pieces of hardware or software you can’t live without? Well, I do most of my work these days in FL Studio, and tend to switch to the new versions whenever they come out. This is mostly because I do most of my writing in the piano roll, and FL has the best one in the business. I do most of my mixing on headphones (gasp!), which are a set of Beyerdynamic DT880 Pro headphones fed by a little Yamaha mixer. As far as plugins, these days, I don’t know what I’d do without a little freebie plugin called CM Fuzz, distributed by Computer Music Magazine, which is basically a reskinned version of Camel Audio’s Camelphat processor. I chuck that on nearly everything to thicken each part up. My go-to synths right now are a small handful consisting of Harmless, Toxic Biohazard, 3xOsc, and Harmor by Image-Line, and supplemented mostly by Native Instruments’ Massive and FM8, as well as my newest toy, Serum by Xfer. I also tend to use at least five plugins in my Waves collection on every track these days as well—got the Gold bundle a while back for a total steal, thanks to some upgrade discounts combined with Black Friday savings.

On my band’s album, I did a lot of the work in Logic Pro, however, which I’m starting to really enjoy—my goal is to get as proficient in Logic as I am in FL, so I’ll have the best of both worlds to work with. Goal for 2015! As far as the actual process goes, well, it depends—I’m often set off on a song idea by one little lick, synth patch, loop, whatever. Music to me is like solving a puzzle. Find the pieces that fit with what you already have in front of you, and all of a sudden, you get a complete work of art!

4. Related to that, are there any tips for up & coming producers who want to follow in your footsteps, perhaps after seeing you at a con? Honestly, the way I got to where I’m at currently is just get in there and push buttons and turn knobs and find out what the heck they do. Don’t rely on presets (even though they’re useful), and always be learning as much as you can. Every song I create is an experiment in SOMETHING, so I’m always finding new things. I did get an audio education formally from a local school called the Conservatory of Recording Arts and Sciences, which was helpful, but most of the knowledge I got there would be just as viable being learned through experience and research on your own. If you can learn, fundamentally, how things like EQ, compression, reverb, synthesizers, etc., work, then you can make any sound you want. Understand sound, and you can go a LOT of places with that.

Also, please don’t pirate software. It WILL go on sale at some point, and you WILL be able to afford it. Don’t give me that bullshit about “waaaah I can’t afford to buy this thing so I’m going to pirate it instead,” because you CAN afford it if you’re patient and save your pennies. Plus, there are so many great free options out there that there’s really no excuse for making life harder for us legitimate users. Learn to use the tools you already have—that’s certainly a big part of why I’m good at what I do!

5. What are those convention parties like? How do the attendees respond to your eclectic mix? The convention parties, to me, are my favorite place to go and “rave.” If the right DJ is playing, then the attendees are usually pretty enthusiastic, and it doesn’t usually matter what kind of music you feed ‘em as long as you do it with passion. Of course, there are the nights when NOBODY decides they want to stay past about 8 PM (usually a Friday), which means that I’ve played to crowds as big as 1000+ and as small as literally five people, haha. That said, the response to my sets is usually very positive, especially from people who get bored easily, like me! I like to keep things moving around and don’t usually stick at just one tempo the entire time, so it gets to be a lot of fun.

6. When do we get more Trance & Bass? Where did that genre come from, any artists you’d recommend for fans of that sound? Well, I’m not exactly sure when the next set of Trance’N’Bass songs I’ll release will come, but it’s one of my favorite genres as well, so hopefully I have time to do some soon! If you dig the heavy ambience and focus on melody on top of a fast breakbeat, then of course my good friend zircon (lower-case Z, yup) is a master of that stuff. Like me, he’s all over the place (except perhaps even more than I am), but when he tackles the DnB-type genre, he tends to add plenty of flair to it! Aside from that, I used to listen to a lot of the podcasts by John B, who tends to do some fun stuff with his interpretation of DnB. Honestly though, I’m not sure if there’s anyone out there who’s approaching it the same way I am, which is essentially creating a trance song with DnB tempo and drums, rather than create a DnB song with trance elements. If there is, I want to find them and collaborate! 😀

7. Any tentative appearances/tours/parties already booked yet? Where can we see you live? As I write this, I’m trying to stay in communication with the APEX tournament and Twitch.tv, as they’re thinking about hosting a party after the giant tournament—this would be on February 1 in New Jersey, and I think their website has details as to precisely where. If that goes through, I should be playing for a solid three hours at least! Aside from that, you can usually catch me at most of the local anime cons in Arizona (Saboten, Con-Nichiwa, Kikori, etc.), and you never know where I’ll pop up next! I may have also just gotten in on playing a local barcade (yes, it’s as awesome as it sounds) called Endgame in Tempe, AZ every other weekend starting in March. We’ll see about how that goes! I’ll try and remember to keep my Songkick account updated, though, so if you follow me on Soundcloud or Bandcamp, it *should* show up there. My goal for 2015 is to apply to as many conventions as I can, and get paid enough to make it worth the trip. Here goes nothing!

8. Anyone out there you’d like to collaborate or perform with? So many people! The top of my list is electronic music genius and guru BT, as he’s one of my biggest influences and a hero of mine. I would also LOVE to collab with literal EDM savant, Savant. That’s setting the bar incredibly high, though, I’m sure. Past that, there are a ton of folks on YouTube that are insanely talented at what they do—some of my favorite YouTubers include Andrew Huang, Dave from Boyinaband, and Gunnarolla. These are guys who have a huge amount of dedication to their craft, are versatile, and generally seem to care a LOT about their art as well as the people who consume it. Finally, I’ve really enjoyed working and performing alongside VGM/EDM stalwarts such as Ben Briggs, Grimecraft, Dj Cutman, bLiNd, as well as many of my OCR cohorts, and hope to continue our relationships well in the future!


9. If you could perform anywhere in the world, where would it be? Anywhere? Uh…I’m not sure. One of my goals is to someday play the San Diego Comic Con, since that’s kinda the single biggest “nerd event” in the world, but aside from that I absolutely LOVE travelling. If I could play shows on every continent, that would be SUPER. I’d also really love to play some giant music festivals someday and take VGM EDM mainstream—Coachella, I’m looking at you!

10. Favorite classic video game & favorite video game you’ve played in the last year!? My favorite classic video game? I’m not sure. Growing up, I played a LOT of educational games (I was homeschooled and we didn’t actually have a console; strictly PC-gaming for us), so titles like Super Solver’s Gizmos and Gadgets got a ton of screen time for me. The one “real” video game I played early on as a kid was the original Rayman for PC, which to this day holds a special spot in my heart AND it’s what got me hooked on video game music in the first place, since you could put the game CD in a regular CD player and it’d play all the music. Great stuff, to be sure! Past that, my favorite video game of the last year is probably…hrm, honestly, Smash Bros 4 (on 3DS, since that’s all I have besides my PC) has been pretty much the only thing that got any regular screen time from me! I will also destroy any comers at Mario Kart 7 for the 3DS. BRING IT. 😛

Bonus: Favorite track or mix of 2014? Uh….I have so many things I love that it’s hard to choose just one!