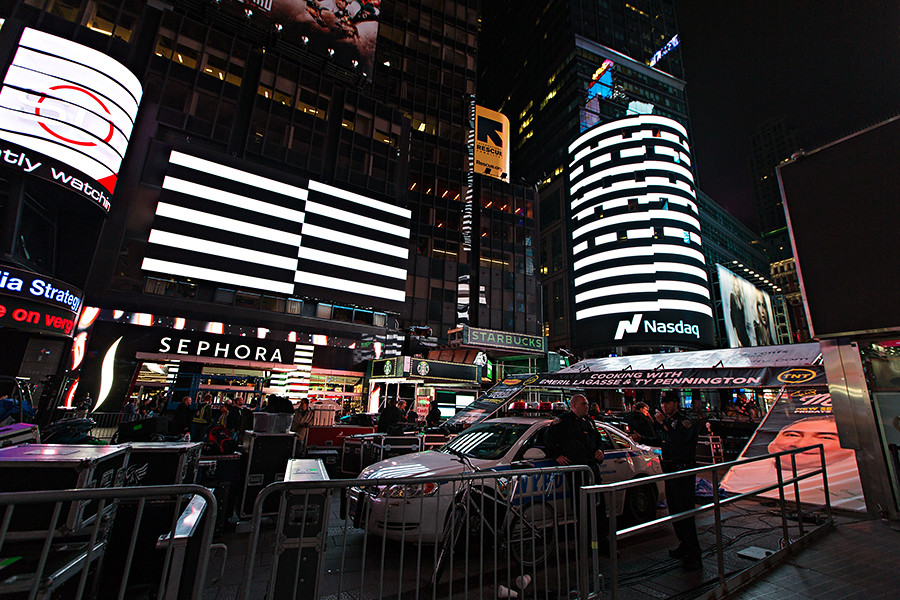 So, apologies for the lateness of this post, as I had no idea. It seems ambient producer & artist Ryoji Ikeda has been dropping test patterns, images & sound every night in Times Square. He takes control of all of the billboards for 3 minutes a night, removing all the ads & putting minimal, ambient & IDM with visuals to match, from 11:57 to 12 midnight every night. I can’t say I’ve ever heard of a visual artist taking over all of the screens in Times Square, but now I REALLY want to see what that control station looks like. That must be a crazy set up. Check out some of Ikeda’s stuff below, if you’re into this kind of thing. If you happen to be in Times Square at 11:30, maybe hang out for 27 minutes to check this out before it ends Oct. 31st. (via Stoney Roads. Which, to learn about something cool in Times Square from an Australian music blog is just a sad proof of the times we live in.)

It’s Valentine’s Day if you’re reading this within 24hrs of it being published (hey, I can’t predict when this is going to get clicked on). So, in the spirit of both the good stuff that comes with people showing affection to each other because they’re reminded to in February and the jaw-dropping level that capital markets can sharpen and polish a product, I present ” All You Need Is Love.” This hilariously over-produced combination of “trance” and “hip hop” (I uses both terms extremely loosely here) inspires thoughts about the commercialization of love and how emotion has been co-opted for fun and profit. Though, there’s a pretty fun rhyme about Sochi. Enjoy! 😉

(This is my New Year’s Eve review, done for Electronic Night Life. Hit up the original post here & show the blog some love for giving me some sweet access.)

I’d always assumed Savant would be less of a baller in real life, but it seems I was wrong.While a million people were partying less than half a block away from the theater, inside & down one escalator, we found ourselves ensconced within a bubble filled with ravers, club kids, New Year’s revelers & a heaping serving of psychedelic trance, dubstep & banging electro. They were able to  create a party inside of the pocket dimension next to Times Square, where if I didn’t know better, I would assume it was just a regular night outside, and not be playing second (or third) fiddle to one of the biggest parties of the year.

By the time we’d negotiated New Year’s checkpoint after checkpoint, my companion & I were granted access to Best Buy Theater to see Infected Mushroom, Astrix & Savant. This massive performance was going to be Infected Mushroom’s first since August & Astrix’s first in years. Savant was doing excellent work when it came to revving up the crowd as he transitioned from Beatport Top 50 tracks to his symphonic but bassy self-produced tunes. The GA was eating it up, so after dealing with the New Year’s-amplified drink prices, we settled in for a long night of amazing beats & psy-focused music just as he was finishing his massive set. The set must have got the attention of hundreds of attendees who are hopefully downloading his new CD, “Orakel,” at a rapid pace in thanks for such an attentive & non-prerecorded experience.

We’d gotten the ok from security to start photographing right as the Fungusamungus stations began powering up. These spheres, the centerpiece of the Fungusamungus tour, were truly a sight to behold. 2 professional-grade projectors bathed the stage in what seemed like millions of colors, mapping complex images, shapes and color gradients to every surface on the spheres. Dudev & Erez were hidden inside, pushing the signature Infected Mushroom sound out into the theater, while the crowd got more and more excited. I’ve definitely seen Infected Mushroom perform without any of these new fangled toys, and it was a sight to behold then. This pushed past anything I’ve seen outside of Amon Tobin’s tour. Incidentally, I was informed at the show that the same group that did Tobin’s insane new set-up, did Fungusamungus. So there’s that.

The set did not disappoint. I’ve seen these guys perform for years, but not since they added their latest round of Friends on Mushrooms compilations, and a show of psychedelic rock-drenched trance was given a delightful topping of massive dubstep, electro and the odd classic that everyone seemingly knew the words to. To hear younglings chant all the words to Cities of the Future brings a tear to this old chestnut’s eye. Becoming Insane, Vicious Delicious & tracks from the later offerings including their track with Savant, kept the crowd moving.

As they finished, we began to make preparations to get a drink in between the set change, but roadies just came out, dropped decks & laptops down, then the two Israeli champions of psy-trance came out and straight DJ’d for the next half an hour, back-to-back. They hadn’t had enough so they kept doing work with the insane 3d projection work going on behind them. We got comfy and watched them slowly transition into Astrix. Who, not to be taken lightly, exploded out of the gate with some seriously stompy full-on psy-trance.

The crowd, that was clearly going to be there until the floodlights came on, whipped themselves into an even greater fury than they’d been maintaining previously. The GA spread out, people gave each other room, and the sizable remainder really began to cut loose. Everyone was amazingly happy to be there, to share the night and to get the chance to enjoy some crowd favorites until as late as they’d let us play. Enjoy my favorite track that Dudev & Erez obliterated the dance floor with below:

Great night, great way to ring in 2014, great job Best Buy Theater for handling the event with such finesse. This is Terry Gotham, see you on the dance floor.