Production from artists all over the world today! Lots of great stuff coming in, so let’s get right to it!

Viticz did something special with this tune. While Electro as a genre has been pretty stagnant over the last couple of years with the Big Room genre wilting, the producer from Singapore has pushed it in a totally needed direction. It’s got a touch of future, a touch of garage, a dash of chip and two scoops of anthem. This is a great effort by Viticz I’d never heard of but will definitely be keeping tabs on in the future.

Jumping from Singapore to Uddevalla, Sweden, Milwin pulls us into that Future House territory with a soothing tune. I have a pretty low tolerance for most Future House, but this one silences the usually annoying throbbass while featuring Blest Jones. This focus on a soulful, blues-oriented vocal line gives the track a more of a melancholic, autumn feel. Surprising, but great work from Sweden & Milwin as always!

Varien & Mr FijiWiji are two of the best knights in the court of Monstercat Castle. They’re production geniuses in their own rights and this collab could not have come at a better time. They can learn a lot from each other as the melodic bass shows. A truly future tune, they’re able to make even a rift of sexy sax work in the context of this chilled out, starry-eyed 4min. Silky, progressive, with just a dollop of euphoric above and bass under it. Really great work gentlemen, can’t wait for the next one & the Monstercat tour.

And now for something completely different.

BLNDSGHT is some wavy shit. Well produced, with some eccentric choices that the Cali producer has ensured almost have no choice but to work together. It’s got this groovy, spacey feel to it. Can’t say it’s dancey, but it manages to be downtempo without being too minimalist or droning. The low end is surprising and it would fit nicely into a side room or fucked up afterparty set.

Finishing out with some great trance. I’m going to make a concerted effort to post at least one trance tune a week, because I think the genre still deserves ears. Some cool stuff happening in it even outside of the juggernaut of quality that is A State of Trance. Coldharbour Recordings is Markus Schulz’s label & it’s been growing on me. Classic trance vibes & deep/energetic modern tunes from artists I’m not familiar with as an American trance family member. Have I ever heard of Dan Thompson & Ron Alperin? Nope, couldn’t pick their music out of a mix if you paid me. They sure can make a good mid-set trance track though. Go swim around in it & I’ll see y’all next week!

(This is a repost/expansion of a post I did last year at EDMTunes. Give them some love & help me thank them for giving me the opportunity to yell in long form on the internet about music people don’t listen to anymore)

As fans of Armin Van Buuren, Paul Van Dyk, Tiesto, Ferry Corsten and others can tell you, Trance has been around, but it’s been a while since it’s been at the forefront of the dance music consciousness. But how long has it been around for, and how did it get here? I’d like to take you on a brief trip, from Trance’s humble beginnings, through its boom around the millenium & all the way up to New Years 2014.

END_OF_DOCUMENT_TOKEN_TO_BE_REPLACED

While some of us had the good sense to not miss their debut performance at A State of Trance 600 (reported on here), the rest of the dance music world got their first taste of the New World Punx, the new mega-collab between Ferry Corsten & Markus Schulz, at either Roseland in NYC or Palladium in LA. The act is harder, more in your face and definitely way less ethereal and smooth than an act like Above & Beyond or something of the like. However, this is by design, as the two mega stars relayed to Billboard last week.

Romper is an intense, stompy track that infuses a serious amount of “you’re two steps from hardstyle” energy into the dance floor. They are acutely aware of the stagnation of mainstage dance music these days, and as Billboard reports, they’re down to drop the drop as it were. Keep the energy up throughout the set, and not wait for the same build/drop/blowout formula that caught trance, electro, house and is slowly entangling trap within its unimaginative tentacles.

Armada Music has been an institution for a decade now, bringing the best in trance, tech trance & progressive to the people. While keeping up with the 20+ hours of podcasts your favorite DJs put out each week can be exhausting, there are a number of tracks in these sets that always stand out. Armada took 50 of the best trance tracks from late last year, early this year and fired them off, ready to land in your lap and explode in an orgy of sparkle, vocals, chromatic chords, uplifting, massive & progressive bass. The first CD launches with huge tracks, with Nehalennia, The Spiritual Gateway, Kudawudashuda &  the MaRLo edit of “Perfectly” hitting your ears one after another. The Love Comes again remix, the Pure Mix edit of Seven Cities by Solarstone & the radio edit of Andrew Rayel’s Musa are gorgeous mixes of recent crowd favorites that have blown up dance floors from Dublin to Dubai & Sao Paulo to Shanghai. They keep the energy going along with a half a dozen tracks in between that you’ve probably not heard but probably should. Superfly by Jorn van Deynhoven is a spectacular hard trance track that pushes the party to a higher level, buy anyone that’s a fan of my writing can tell you that Jorn van Deynhoven can do no wrong in my eyes. The tune is one of 2 dozen that are exactly what trance needs to be right now. Anthemic, big room and explosive with the energy to push back against the forces of trouse and top 40 infused commercial chomp-back that true trance fanatics shake their heads at. New York City by Alex M.O.R.P.H. is of course a favorite and the mix that’s offered at the end of the CD is a great choice for just putting on and leaving on while you dance around in your underwear in your bedroom before hitting the town.

END_OF_DOCUMENT_TOKEN_TO_BE_REPLACED

“You see this guy, this is the smartest motherf*cker in this whole building, out of all y’all.”

The ticket taker was pointing at my ear-plugs and reminding the younger, hipper crowd that ears were not invincible things. As I plan on going to shows like these for decades to come, I chuckled and moved along. There was an over-priced beer and a seat with my name on it. Alex M.O.R.P.H was cutting loose on the decks and while I didn’t catch his whole set, it was quite enjoyable.

END_OF_DOCUMENT_TOKEN_TO_BE_REPLACED 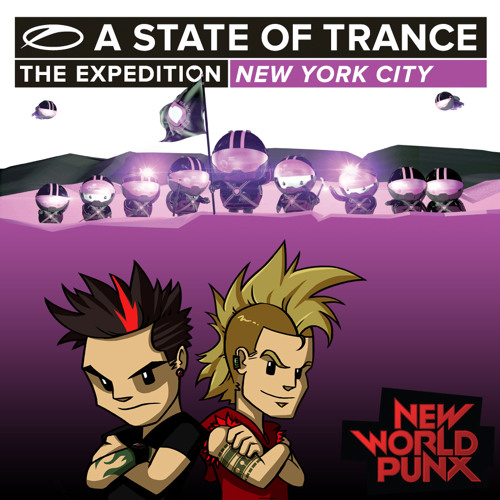 A State of Trance 600 NYC was a triumph. While I can’t wait to share my expanded thoughts about the event, the music, the crowd and the entire evening, I wanted to make sure that this specific set was noted. I’ve been a fan of Ferry Corsten for years, while Markus Schulz has started exploding in my awareness only a year or two ago. The collaboration history of Ferry is impressive and the New World Punx lineup was amazing. The tracks were hard, fast and insanely well mixed. The closest ID’ing of the tracks is below, and any track that you see as a New World Punx remix/mashup or bootleg mix, just go ahead and assume it’s fantastic.

Of course, track 20 “The Digital Punks of Gotham” is my favorite unreleased track of the set. How could you tell?